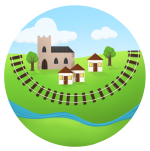 We’d also like to thank the two members of staff from GTR and the one member of staff from Network Rail who attended the meeting to take questions.