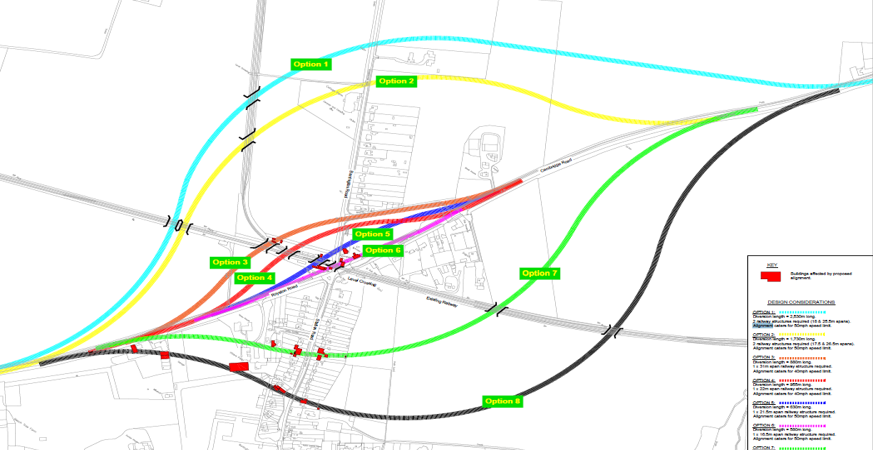 Tim Watkins of the Greater Cambridge Partnership (GCP) came to present at the Foxton Parish Council Meeting on 5th November 2018 to discuss the proposed A10 Foxton Level Crossing Bypass and Travel Hub.  This was a follow up to the Meeting on 5th March 2018.

Tim explained that the original intention had been to re-examine the Network Rail GRIP 2 report from 2013 which was to review
options to close the existing railway level crossing at Foxton, Cambridgeshire, and provide a suitable replacement infrastructure to cross the railway safely.  However, the scope of the GCP remit is wider than the original report so they decided to return to first principles and propose a number of different routes which can be assessed against the criteria. 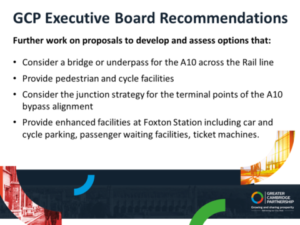 Tim showed a slide of 8 different route options which are under consideration.  A large scale version of the map was also available to view outside the room.  There was also a map of 6 options for car parking.

The next stage is to engage with stakeholders until December 2018.  A feedback form was provided at the meeting for attendees to provide feedback on the level crossing bypass routes and possible location for the Park and Rail site. After that the options will be refined, and a recommendation made to the GCP Board in March 2019.

More information can be found on the GCP website with a link to the presentation from the evening. 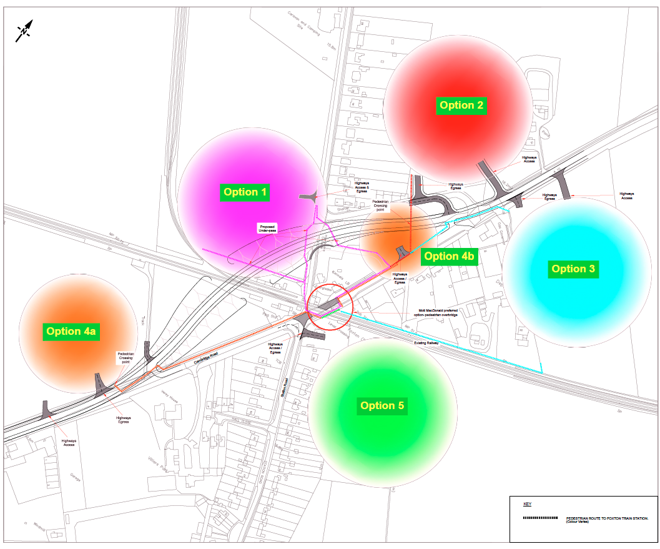 Question and Answer Session
Q: Foxton has a local plan in place, several options shown would be built across Green Belt Land.

A: Development to improve travel could be permitted within the Green Belt.

Q: The remit of the original Network Rail investigation seems to have grown, the scheme no longer appears to be about solving a problem, but for enabling growth and development.

A: The scheme will be assessed by a multi-criteria assessment process.  The growth of the bio-medical campus (not considered in the original report) will be associated with a growth in traffic on the A10, and a constraint to this growth is the Foxton Level Crossing.

Q: What is the point of speeding traffic up through Foxton if it is to come to a halt at Harston?

A: Traffic modelling will be part of the assessment of options.  If the costs and environmental impact do not outweigh the benefits captured, then the scheme will not go ahead.

Q: Is an underpass still an option?

Q: When is an announcement expected about East West Rail?

A: An announcement is expected in the New Year.

A: We will be engaging with Network Rail and inviting them to comment on our options.

Q: How much clout do you have with Network Rail?

A: Difficult to say.  Network Rail’s stated aim is to close level crossings.  If our scheme helps with that aim, they should support it.  If their aims change, they may not support our scheme.

Q: Will section 106 money be available?

A: The Local Authority could seek to secure section 106 money from CGP and/or Network Rail.

Q: The Mayor is under pressure to “fix” the problems of transport in Cambridgeshire. To what extent is the Mayor engaged with this project?

A: The GCP works with the Combined Authority, both have adopted the local plan and the long term transport plans.

Q: Since May Foxton has experienced timetable disruption, has the effect of a new station at Addenbrookes been considered?

A: The new station will be put into the consideration – demand for parking in Foxton will go up if a new station is built at Addenbrookes. Transport modelling will be carried out to assess the effect.

Q: What assumptions have been made in the plans about track width?

A: Current plans are based on 2 tracks. If East West Rail comes through Foxton and the track needs to be widened, additional money could be sought from Network Rail.  GCP will make their announcement in March 2019, however, if East West Rail make an announcement before then, this would have to be considered.

Q: Will there be a leaflet distributed to all the households in Foxton describing the options? Not everyone is on the internet.

A: As part of the process a template has been developed for feedback, and there will be the option to return this by post, however there will not be a full public consultation, and no leaflet distribution. Local Councillors and Representatives will be expected to represent the views of their constituents.

Q: How long will construction take?

A: Difficult to say, but similar projects have taken 18-20 months.

Q: Have you made contact with the Hertfordshire authorities who are responsible for improving the A505, making it dual carriageway from Royston to Junction 10 of the M11?  A travel hub has been suggested in Sawston.

A: Yes, plans are in place to meet with them.