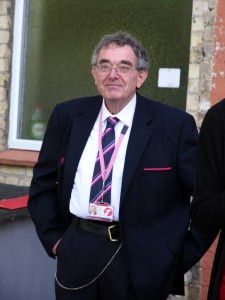 We’re expecting a big crowd at Meldreth Station this Saturday (12th December 2015) 11am for the retirement of our legendary Station Master, David Piggott.

David was a Mastermind contestant in his day alongside working for all the train companies that have come and gone: Govia Thameslink Railway now, and previously, First Capital Connect, WAGN, etc.

He is famous for his platform announcements in fluent Spanish, French and Italian, whenever European travellers have boarded at Meldreth, and also for his regular hospitality to all rail travellers, providing hot drinks and cold drinks depending on the season.  He is also known to ring up all regular commuters, including sixth formers, in the event of a late train, to allow them extra time at home before heading to the station at the start of the day.

Inspired by David’s generosity of spirit, the Meldreth, Shepreth and Foxton Rail User Group was formed in 2010 and now helps to look after all three stations in various ways.

Everyone is welcome to Meldreth Station on Saturday. We’re expecting a large number of David’s work colleagues and an even greater number of local residents who have appreciated David’s unique service to the community over many years.