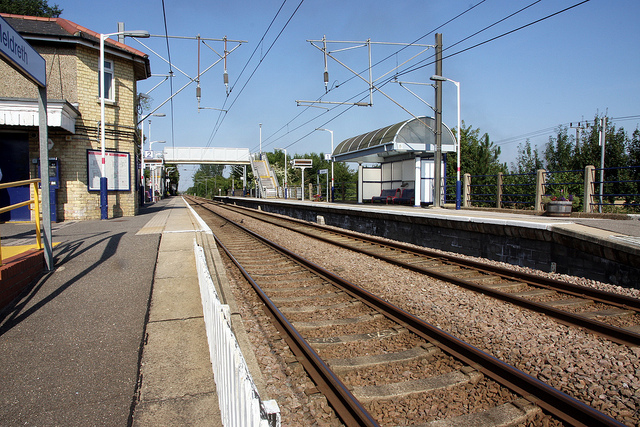 Residents local to Meldreth Station will be gathering on Wednesday 8 January, 11AM, to support the Meldreth, Shepreth and Foxton Rail User Group’s campaign for better station access.

While Meldreth is a healthy and important rural station, the rail user group believes that many people are missing out on access to rail services there. Steep flights of steps over the tracks, and another set of steps leading down to the Melbourn side of the station, mean that only those able to climb stairs can use the station. This includes not only people who are elderly or infirm, but those managing pushchairs with small children.

“The presence of Meldreth Manor School at the heart of Meldreth should mean that we have a flagship station for disabled access, but in fact Meldreth is one of the least accessible stations in the Cambridgeshire. Anyone arriving on the London-bound platform in a wheelchair will find themselves literally stranded, with no way of getting off the platform.

Meldreth Manor School has been a long-time campaigner for access improvements and regularly hosts rail user group meetings.
While the train operating company can help with smaller improvement, like the ramp from the car park installed by First Capital Connect several years ago, major improvements to station infrastructure depend on Network Rail funding.

The Rail User Group recognizes that resource must first be spent on stations with greatest footfall, but with the current replacement of lifts at stations like Letchworth, it hopes to ensure that Meldreth Station is firmly on the waiting list. It would also like to solve the problem of access from the London platform to the field and path leading to Melbourn village – something that could see new support when the train operating franchise changes over next year and a new period of infrastructure investment is kick-started.